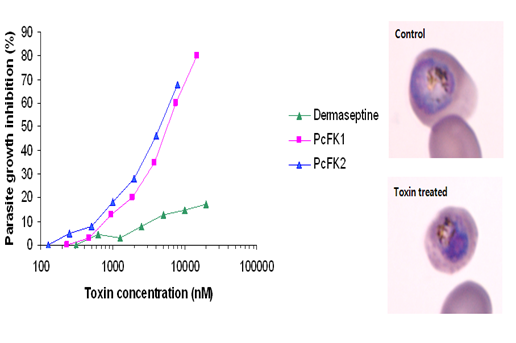 Animal venoms are valuable sources of novel pharmacological tools whose specific actions are useful for characterizing their receptors. Hundreds of toxins from snakes, scorpions, spiders and marine invertebrates with a range of pharmacological activities have all been characterized.

S pider venoms contain a wide spectrum of biologically active substances, which selectively target a variety of vital physiological functions in both insects and mammals. The spider toxins are “short” polypeptides with molecular mass of 3 to 8 kDa and a structure that is held together by several disulfide bonds.

There are two main groups of these peptides, the neurotoxins that target neuron receptors, neuron ions channels or presynaptic proteins involved in neurotransmitter release, and the non- neurotoxic peptides, such as necrotic peptides and antimicrobial peptides.

As part of a general screening for antimalarial drugs, the potential of toxins from Psalmopoeus cambridgei , the Trinidad chevron tarantula was investigated. As a result, two novel peptides (PcFK1 and PcFK2, P salmopoeus c ambridgei F alciparum killer) that possess great antiplasmodial activity against the intra-erythrocyte stage of P. falciparum in vitro , but do not lyse erythrocytes or nucleated mammalian cells and do not inhibit neuromuscular function, despite their structural similarity to known neurotoxins.

The structural properties of PcFK1 was also investigated to help understand the unique mechanism of action of this peptide and to enhance its utility as a lead compound for rational development of new antimalarial drugs. The three-dimensional solution structure was determined by 1 H two-dimensional NMR means of recombinant PcFK1, which is shown to belong to the ICK structural superfamily with structural determinants common to several neurotoxins acting as ion channels effectors.

Unusual structural features using MS and MS/MS analysis of two different forms of recombinant PcFK1 (r-PcFK1) was identified and the connectivity of cysteine residues involved in disulfide bridges was also unambiguously determined. The mechanism of action of two antimalarial peptides is now under investigation.